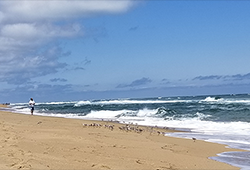 Diane and Nelson Henderson retired to the Outer Banks after raising a family and enjoying interesting careers in and around our nation's capital – Nelson as a political analyst with the CIA, and Diane as a computer programmer. Once here, they became involved with several causes, including their church and the Outer Banks Community Foundation. In fact, Diane served as secretary and treasurer on our board of directors in the early 90s.

But Diane didn't just write about planned giving; she actually did it herself. When the time was right, Diane and her husband donated a portion of their assets into a Charitable Remainder Trust and named both the Community Foundation and their local church (the Unitarian Universalist Congregation of the Outer Banks) as beneficiaries. For this trust, at the Hendersons' request, the Community Foundation served as trustee, but we have worked with other donors who name their bank as trustee, and even some donors who act themselves as trustee.

The Hendersons received an income tax savings the year they established the trust. For the term of the trust, they received regular income from the trust, based on a percentage of its value. At the end of their lives, the remainder—close to the amount of their original contribution—was divided between their charities of choice: their church, and the Outer Banks Community Foundation. Already we have used their gift to award grants to Community Care Clinic of Dare for a Spanish Translator, Dare Education Foundation for remote learning support, and to Ocracoke Preservation Society to stabilize the historic Oddfellows Lodge.

Is a Charitable Remainder Trust (CRT) right for you?

Click here for more on tax advantages of CRTs, and for a financial illustration to see your income options and your potential tax benefits. Call us if you would like to discuss your options; we would be happy to talk with you.