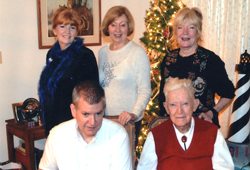 Warren Davis was born in 1920. Cars and lightbulbs were still fairly new inventions. The 'war to end all wars' was over, the economy was strong, spirits were high, and the latest fads and fashions were causing an uproar. Warren grew up in a time when family, church, God, and country were the focus of the large majority of Americans. He selflessly devoted his life to serving others, and he was passionate about education, children, and lifting others up. He created the Dare Math/Science Scholarship Fund in 1987, and, through the Community Foundation's scholarship program, his passion for education will continue to be felt for many, many generations to come. Every year, renewable scholarships will be awarded in Warren and Jane Davis' names to Dare County students pursuing math and science-related college degrees.

Warren grew up in Muskogee, Oklahoma, and was nine when the Great Depression gripped the nation. He survived by "eating applesauce sandwiches;" he was a bright child and skipped enough grades to enter college at age 16. Warren graduated with an engineering degree in 1940. His first post-college job, with Gulf Oil Company in 1941, was cut short when he joined the Mighty 8th Air Force in Britain in 1942. Under his leadership (he was captain of the 493rd Bomb Group's ground crew) and abetted by his problem-solving skillsets, his squadron was recognized with the Bronze Star for their ability to put together damaged B-17 bombers.

Back at home, he returned to Gulf Oil, where he enjoyed a successful career that spanned more than four decades. Hired as an entry-level engineer, he retired from Gulf Oil in 1983 as their Chief Economist. In the 70's, Harvard University enlisted his help to rewrite petroleum industry case studies. The world was his oyster.

Warren and his bride, Jane, raised four children, and they instilled a strong sense of duty in each of them. Both parents volunteered for the athletic and civic programs their children entered in to, and served as starters, umpires, boosters, and "the best Girl Scout leader any girl could ever have." Warren and Jane instilled philanthropy young in life by providing allowance and encouraging their children to give a little of that precious weekly spending money to their church.

Warren and Jane moved to the Outer Banks after "retirement," where they wasted no time becoming heavily involved in church and local charitable efforts. Logging 10,000 volunteer hours at one nonprofit alone, Warren boosted many local organizations, including Outer Banks Hotline, College of the Albemarle (COA), Dare Literacy Association, U.S. Fish and Wildlife, and Outer Banks Forum.

Warren was particularly keen on tutoring children and young adults, and drove to Elizabeth City every Friday morning from 1987 to 2000 to tutor students in math and English at COA. He continued tutoring locally well into his nineties.

The Dare Math/Science Scholarship fund was established at the Community Foundation in 1991 with an initial gift of $12,500. The first $1,000 scholarship was awarded in 1994; since then, more than $35,000 in scholarships, many for four years, have been awarded.

Caroline Lowcher, one of the Davis scholarship recipients, wrote, " The Dare Math/Science scholarship assisted me in obtaining bachelor's degrees in Applied Mathematics and Oceanography. These were crucial stepping stones on my path of higher education and setting me up for a successful career. As a female in STEM fields I am a minority, so to have the support of this scholarship encouraged me to pursue male-dominated fields. Supporting minorities and including women in STEM fields is a national mission of multiple federal science agencies, so it is great to see that transpire on a local level in our community."

Caroline is currently pursuing her PhD in Physical Oceanography from Scripps Institution of Oceanography and is studying to become an observational oceanographer, making measurements of the ocean, and using math, physics, high-quality research, and scientific analysis to understand the circulation in the coastal ocean.

Another Dare Math/Science Scholarship recipient is Beach Gray, who attended Williams College from 2004 to 2008. Beach ultimately switched his major to Russian studies, after an internship abroad; he said that "the structured logical thinking that assisted me as a mathematics student helped me to acquire the Russian language in a systematic way."

I now have a career as a defense contractor in the DC area. I use Russian in my job every day. And therefore, although my journey did not end with a career in Mathematics and Science, I have still achieved the goal of the scholarship to attain gainful, impactful employment. I would also like to add that I am very grateful to have been a recipient of the scholarship.

One last thing. The scholarship also gave me a deep appreciation for the Outer Banks Community Foundation and for the necessity of scholarships for all students, regardless of initial academic interests.

The name of this scholarship fund has been changed to the Warren and Jane Davis Memorial Dare Math/Science Scholarship , to honor a request by the Davis children to memorialize their parents. The fund is endowed, meaning that the principal is invested and only 5% of the fund balance is expended in any given period. Endowments are structured to last forever, to benefit the community and stand as a lasting legacy for their founders.

Anyone can make a gift to this fund, or any of the more than 200 funds held at the Community Foundation, by going to obcf.org/donate and searching by fund name in the drop-down list.

Anyone can create and name a scholarship fund at Outer Banks Community Foundation; it costs as little $1,000 to get started; as long as the fund balance is grown to $5,000 within three years. Call or email us to get started.

For as long as Dare County children yearn for higher education in math and science fields, the Warren and Jane Davis Memorial Dare Math/Science Scholarship will be here to serve them.